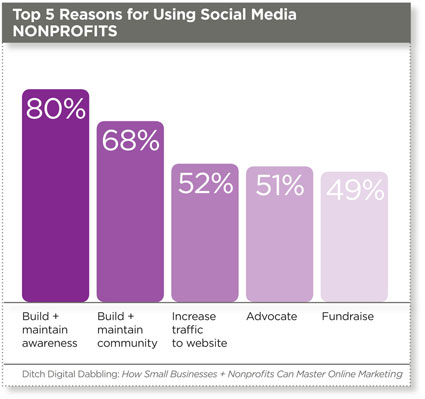 Getting Answers: LinkedIn for Nonprofitsback
By Geri Stengelon May 8, 2012 - 4:20am

LinkedIn groups are an interesting way of taking the pulse of a specific community on a topic and collecting feedback on challenges you face. It’s also a way of becoming a thought-leader, by answering the questions of others. Yet, it is not one of the top five reasons nonprofits use social media.

As an example, here’s a philosophical question for you, one that needs practical answers: To what extent can you engage with unethical partners without becoming tainted yourself? Or, as posed on the Chronicle of Philanthropy LinkedIn Group:

Can philanthropy ever be evil? Do nonprofits have an obligation to consider morality of the sources of their funding? Has anyone ever confronted this issue?

Much of the “good” done throughout history has been financed by what one could call “repentant sinners,” such as Carnegie with his libraries, funded by the exploitation of labor in the days of the robber barons.

Some might put the new David Koch theater at Lincoln Center in that category as well yet how are libraries and other social needs to be funded if we turn down money from “tainted” sources?

Komen for the Cure is a perfect example of this conundrum. At one point, it entered a partnership with KFC, whose menu is viewed by many as contributing to many health problems and thus is a bizarre partner for Komen, which is dedicated to women’s health. But a lot of money was raised for women’s health.

In the LinkedIn discussion, Suzanne McDonald gives the example of Coca Cola, which is funding AIDS prevention in Africa but being sued in India for contaminating groundwater. Is the work in Africa worth the lives of those in India?

But, in Marshall McNott’s opinion, we are all flawed in some way and nonprofits would be defunct if donors had to pass an ethical/moral litmus test.

How should a nonprofit weigh the source of funds against the importance of its own mission?

Our choices and our voices matter.

Which is why LinkedIn discussions are important. You get a variety of opinions, options to weigh, and ways to proceed (policy about funders anyone?) as well as being able to show who you are by voicing your own opinion.

What would you answer to the question posed above? What is your organization’s policy about the source of funding?

If you liked this article, you may also like:
Putting the Power of LinkedIn to Use for Your Nonprofit
How LinkedIn’s New Profile Section Can Help Nonprofits Fundraise, Find the People They Need
Social Media for Nonprofits: It Ain’t Optional!
How LinkedIn Can Improve Nonprofit Governance
Social Media: A New Way to Pass Wisdom on to Leaders