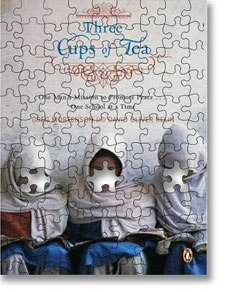 Whoa! Just what do you have to do to lose your place at a nonprofit? Greg Mortenson has been ordered by the Montana attorney general to repay $1 million to the Central Asia Institute he founded because he misspent the charity’s money. By agreement with the Montana attorney general, Mortenson resigned as executive director and can no longer be a voting member of the board.

“He’s the heart and soul of the organization,” Beyersdorfer said. “He’s the co-founder and I think we all think of him as our chief inspiration officer.”

Inspiration officer? This nonprofit is inspired by a man who took royalties on the books his nonprofit purchased, took reimbursement from the agency for travel to speaking engagements for which he was also reimbursed by the host organization?

Which raises a couple of questions. Just what do you have to do to be considered unfit for service by a nonprofit? Does the fact that you founded an organization make you untouchable?

Now I’m no fan of the way Susan G. Komen for the Cure has been managed in recent years but bad PR decisions aside, no one has accused founder Nancy Brinker of malfeasance, just poor decisions that have hurt the Komen brand. Yet voices are raised, calling for her resignation.

Where are the voices calling for Mortenson’s resignation? Why is he still the “inspiration officer” for the Central Asia Institute? Moreover, why is a person who has racked up so many financial violations considered a good spokesman? And if he is the “heart and soul” of the organization, what does that say about the values of the nonprofit?

But he may well represent the heart of the charity, which in $72 million in the course of seven years and has $23 million — about ? — in reserves. While I strongly support healthy reserves, a reserve this healthy makes one wonder just how much work has been done to achieve the organization’s mission. Are schools really being built in Afghanistan and Pakistan?

It’s a conundrum. To what standards should a founder be held? At what point do you stop supporting a charity? What do you think? Really. I want to know.

If you liked this article, you may also like:

NPR Is Lesson to Us All: Policies Must Clear, Known
Cause Marketing Run Amok or Smart Move for a Nonprofit?
What Is Business Ethics?
Is Gates Foundation Unethical or Just Leading Edge?