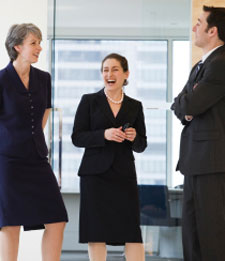 Recent articles in The Economist and in the Huffington Post  have addressed a topic that I’m very interested in: Women in senior management or the lack thereof.

Why Are Are Women Underrepresented in the Executive Suite?
The articles list quite a few obstacles that women face on the way to the top:

The Benefits of Having Women in the Executive Suite
The Economist article notes that there are strong business reasons to bring women into senior management levels:

To this I’d add that a corporation that is diverse is richer in ideas, attitudes, cultures, and approaches to doing business. An environment that values flexibility and creativity has an edge on the competition.

But The Economist puts most of the blame for under-representation in the boardroom on family obligations. Women are the ones most likely to step off the career track to care of children or parents. In doing so, their careers lose momentum.  As a result, many capable women take jobs that have predictable or flexible hours (and earn less notice) or where skills won’t become obsolete if you walk away for a few years. These tend to be jobs that don’t lead to the executive suite.

The article suggests — quite rightly! — that technology can help balance family life and work. Many tasks can be done from home. Meetings and collaboration can take place over the internet. (Of course, that raises the question about why women still have to shoulder the burden of child/parent care to such a greater extent than men but that’s another issue.)

To help with the juggling act, several countries have created better day care, longer maternity leave so women don’t have to choose between infants and quitting and, now, mandatory quotas for women in the executive suite.

While acknowledging the value of women in upper management, The Economist comes out squarely against quotas proposed by the European Union requiring that 40% of corporate board members be women. The magazine argues that mandatory promotion means women who are not ready for the posts will be promoted anyway or that women will be given token, powerless positions.

The same arguments made against affirmative action in schools and employment in the US.

Instead, the magazine supports more voluntary efforts and more emphasis on technology and on making workplaces family-friendly with on-site day-care and family leave programs.

I have mixed emotions. I’m not sure I support quotas although, as The Economist points out, mandatory quotas will create mentors for young women coming up, a “good-ole girls network” if you will. Women at the top, even if there due to quotas, can help other women up the corporate ladder.

But quotas leave women open to the charge that their promotion is due only to the quota, not to their ability. That undermines women and belittles their achievements.

Making companies more family-friendly  and allowing more telecommuting will make it easier for women to balance work and career. To that I’d add that companies or women’s groups need to help women develop the assertiveness needed to negotiate better salaries and the work/home compromises they need. It isn’t pushy; it’s survival.

What do you think? Are quotas for women in the boardroom a good idea? What else do we need to do to get more women into upper level management? Or should we even try?