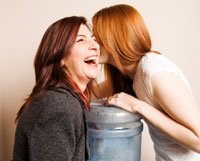 Telecommuting isn’t catching on the way it was “supposed” to.

Despite the benefits to productivity (more productivity, less time commuting, less office space to support), employees (less money spent on gas, autonomy), and the environment (fewer cars on the road), most people still go to the office.

This according to The Future of Work, a report compiled from a survey of 750 knowledge workers by The Work Design Collaborative, LLC.

The “case for flexible work isn’t just compelling – in our humble opinion, it’s overwhelming,” the authors said, and it is clear that they are miffed and stymied by the data showing that 41 percent of individual workers’ time and 77 percent of managers’ time was spent working alone in an office.

Apparently, the case for working from home isn’t overwhelming or even compelling to most people.

The report lays blame for this on the inflexibility of senior managers who can’t let go of control and on the slow adoption of collaborative technologies due, in part, to ineffective IT support. Despite mobile phones, ubiquitous laptops, wi-fi everywhere, Google docs, and the cloud, IT companies, the report concludes, have fallen down on the job of educating people about new ways to work.

They could be right about that second point. Many small businesses and nonprofits don’t understand what they are missing by not using cloud computing, wikis, or web-based data management. When they do reach out for information, they are astounded at the cost savings and increased productivity.

But that first point, the senior executives attached to the good old ways? Nope. I don’t think that’s the major obstacle.

The one big reason central workplaces are still attractive is that people need people. Telecommuting doesn’t fill the need for human contact. Devout mobile phone users are constantly creating apps that bring friends together in the same physical space. Take a look at Green Drinks NYC, if you don’t believe me. Or FourSquare.

Take a look at where the The Work Design survey finds those individual workers when they are outside the office: coffee shops.

A few years ago, when the corporation I worked for at the time offered telecommuting, I realized that not having access to water cooler conversation would be a big problem for me. When I started my own business from home, I had to find others ways of getting human connection without being in an office. The gym was one way; another was joining organizations, including professional networking groups.

That doesn’t mean a meeting every day or even a meeting with all hands on deck. It could be as simple as an in-person brainstorming session for a project team (at a coffee shop is fine). Or cross-departmental, free-flowing brainstorming on company policy. What matters is that people come together, for small talk or a big talk, for a few laughs or some serious problem-solving without feeling constrained.

Create a “water cooler.” Save your employees the cost of that gym membership and you’ll garner greater loyalty, better retention, and fruitful cross-pollination of ideas.

What does your company do to bring telecommuters together? What do you wish it would do?