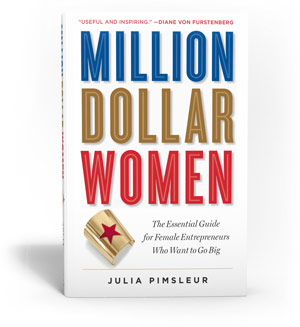 The Essential Guide for Female Entrepreneurs Who Want to Go Bigback
By Geri Stengelon Nov 10, 2015 - 5:00am

Women are sidestepping the glass ceiling and no longer aiming for the corner office. Instead, they’re choosing to strike out on their own. While more women-owned businesses are surpassing the $1 million revenue mark, they are still much less likely to do so than those owned by men. In fact, women are one-third as likely as their male counterparts to grow their businesses past $1 million.

The reason? Women entrepreneurs raise only half as much capital as men do. Undercapitalized companies have lower sales and lower profits and generate fewer jobs.

Julia Pimsleur wants to change that. She wants to do more than simply inspire women to go for the brass ring. She wants to provide a roadmap. And she does so with her new book, Million Dollar Women: The Essential Guide for Female Entrepreneurs Who Want to Go Big. Pimsleur has the street cred to do this. Her company,Little Pim, introduces young children to foreign languages through multimedia programs.