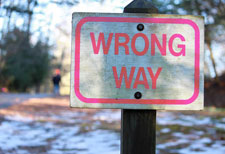 Lessons Nonprofits, Business Can Learn from Komen Foundationback
By Geri Stengelon Feb 7, 2012 - 5:20am

Whether you run a business or a nonprofit, last week’s PR disaster of Susan G. Komen for the Cure should be a wake-up call. This is the third time Komen veered off-mission in a very public way. This time, the nonprofit seems to have learned some lessons about damage control and social media. You’d better learn them, too.

Komen’s first two PR problems — the fried chicken and  the lawsuits against small nonprofits — were handled by an “ignore it and it will go away” policy. This time, with the defunding of Planned Parenthood, its partner in women’s healthcare, Komen at least got in the game, however belatedly.

The ill-planned decision has been reversed, but the organization’s credibility has been so undermined that columnists in both The New York Times and The Washington Post have questioned whether the reversal is sincere or only an attempt to mollify outraged donors. Yes, Planned Parenthood can apply for grants in the future but will it get any? The world will be watching.

And that chicken deal and the lawsuits are back in the spotlight.

In my mind, this brohaha isn’t about pro-choice or pro-life any more than the fried chicken was. It’s about mission focus, consistency and, as I said, good governance. Shifting gears without a clear explanation, in a way that is contrary to your mission (promoting women’s health), is not the best way to build trust or inspire donations and volunteers. If a significant number of Komen supporters oppose abortion, Komen should have directed its money elsewhere from the start.

But, boy, what a great teaching moment!

Look at your policies, partners, and crisis management plan. Good governance means preventing — or at least anticipating — a crisis. Three rules that should guide you:

Never underestimate the power of social media. Komen lost credibility and was forced to reverse course in less than one week. Twitter and Facebook were the battleground, along with blogs and online news reports. In one week, there were more than 1.3 million Tweets on Komen’s policy reversal, according to The New York Times. That’s a lot of exposure and, judging by the comments on Komen’s own video, it was a lot of negative exposure. The question is: Will the goodwill lost on the social networks ever be fully restored?

Plan ahead. Planned Parenthood is a controversial organization that elicits highly emotional responses from both supporters and opponents. The Komen board and management knew that. In fact, according to its own board member, John Raffaelli, it was the controversial nature of the organization that prompted the policy change in the first place. Why wasn’t a plan in place to reassure donors — with something more than platitudes — that women’s healthcare would not be reduced in the communities served by Planned Parenthood. Announcing new partnerships in those communities might have significantly reduced the damage to Komen’s image.

Be consistent. State the reason for your decision and stick to it. Don’t try to backpedal and give alternative, less controversial reasons, when the going gets tough. Anticipate criticism and be ready with your response. Board and executive staff need to agree on the message. Was this done because Komen felt it was losing potential supporters by funding Planned Parenthood? If those supporters were that important, then the decision should stand. If they weren’t, why risk the bad PR in the first place?

An organization I supported has fallen flat on its face. I’m afraid that its blunder will impact not only Komen but, potentially, the nonprofit sector as a whole. Will businesses be eager to enter into cause-marketing partnerships when even a major institution like Komen can reap so much bad press? How can the nonprofit sector hope to earn respect and support when big-name, well-regarded organizations handle a PR crisis so badly?

And, like the columnists for The New York Times and The Washington Post, I’ll be watching the next round of grants from Komen.

If you liked this article, you may also like:
Mission Fit Essential in Cause-Marketing Programs
Integrity without Social Responsibility Isn’t Integrity