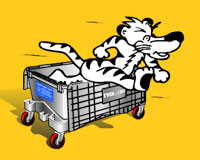 It’s a Vision Thing: Entrepreneurship Is Seeing What Others Don’tback
By Geri Stengelon Feb 11, 2010 - 4:45am

Entrepreneurs are people who see the routine and envision change, who see an opportunity where others see a problem.

Tyga-Box Systems is the perfect example of entrepreneurship. Most of us anticipate moving-day by buying cardboard boxes, packing tape, and marking pens, then throw them all away at the other end of the move. But husband and wife Martin Spindel and Nadine Cino saw that routine as environmentally destructive and just plain silly.

Together, they designed reusable, plastic moving boxes with integrated dollies. The process took several years but by 1996, they were in business.

By 2009, their company had branches nationwide and was awarded a Small Business Best Practice Award by New York Enterprise Report in the Green Business category.

Spindel and Cino aim to eliminate the need for corrugated boxes – think of how many trees that is! – by 2030. With a second bottom line – the planet – that makes them not just entrepreneurs but social entrepreneurs.

They’ve also dealt with another problem we all knew about but did nothing about: that huge stack of boxes, in no particular order, that has to be lifted, carried, and endlessly rearranged to find the box you want. Tyga-Boxes are on dollies so no lifting of heavy boxes, and they are packed in an orderly, retrievable fashion.

Right now, Tyga-Box Systems specialize in office moves but, boy, I’d like them the next time I move to a new apartment or clean out my storage unit!

Why do I highlight them now? Because they represent the essence of entrepreneurship: The vision thing. While the rest of us grumbled about the inconvenience, hard work, and waste of moving from one office to another, Spindel and Cino thought about it and saw a new way of doing business.

Of course, they also had perseverance – it took four years to get from vision to reality – and the confidence that even though their vision veered from the norm, it was a good thing.

Those, too, are aspects of entrepreneurship: Vision, confidence in the vision, and the willingness to keep at it until it becomes a reality.

Spindel and Cino did not set out to become entrepreneurs. It just happened. They had a bad experience moving and decided there had to be a better way.

Between them, discontent and vision can lead to both a profitable business and a better world.

Do you have a vision? What makes you discontent? Are you going to do something about it?