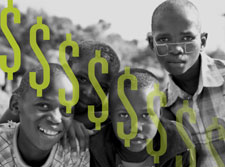 So you’re going along, minding your own nonprofit, putting on great fundraising events, and suddenly the global financial crisis knocks your socks off or, more precisely, knocks out a sizable chunk of your budget.

Young Heroes is a nonprofit that provides support for AIDS orphans in Swaziland. Actually, they provide support for the orphan and the child’s extended family and caregivers. The model is not an orphanage but a homestead in which someone — often the grandmother — takes care of the child.

Keeping children in the community maintains their claim on their land.

And Steve Kallaugher, founder of Young Heroes and now a board member,  is a master of creative fundraising. The major fundraiser this year was the Swazi Challenge, a grueling bike ride and playground-building effort that generated $95,000 in donations and much happiness among riders and playground builders.

But in the midst of that exhilarating and successful effort, Swaziland’s economic crisis hit home. The government has no money.

The administrative costs for Young Heroes — about $200,000 — come from the National Emergency Response Council on HIV and AIDS (NERCHA). The money covers the salaries of five in-county employees: a director; an accountant; two monitoring officers who visits the families and work with volunteers; a donor communications person as well as IT support.

Administrative costs aka operating expenses aka you can’t have a program without support staff. And many donors and funders don’t fund these basics.

But ? of Swaziland’s national revenue comes from customs duties. In the wake of the global business slowdown, that income “just collapsed,” Steve says. Government employees are no longer being paid.

With the highest rate of HIV in the world, Swaziland may not be able to fund the Council and Young Heroes will have no one on the ground to oversee the delivery of services.

Steve is getting all his ducks in a row — how much do they need, will AIDS groups really allow the HIV capital of the world to go without help, etc. So far, the government has come through with partial funding to stabilize operations through the next quarter. Steve is working with funders to get grants for operating costs. Any future fundraising events will still be for program only, he says.

Any suggestions about how a nonprofit can recover from a funding loss?