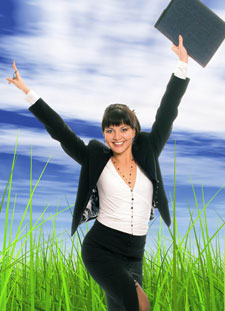 Moving your business ahead may require that you step back … way back.

In those first frantic days of making your great idea into a functioning business, you wear many hats, usually because you can’t afford to hire anyone else to take out the trash out, keep the books and talk to the web designer. But the truth is, your job should be running the business. When you realize that and start delegating, your business will grow.

Margery Kraus, CEO of Margery Kraus, founder and chief executive officer of APCO Worldwide, a global consulting firm headquartered in Washington, D.C. cites the “roots and wings” adage about parenting: You teach basic values and let them go at some point. It is important, she says, to realize that people will do things differently than you might have but that doesn’t make their way wrong.

In fact, a new viewpoint could expand your company’s reach and allow it to grow in ways you never would have considered.

Hester Taylor Clark, founder of The Hester Group, a multi-million dollar project management company, also likens managing a company to parenting, to knowing when your child or your business has grown enough to be given freedom.

“Just as you can over-parent,” she says, “ you can do the same thing to your company. I had to come to the place where I know that the staff I have is capable and then let them go, because they are ready and can handle it … if you hold on too tightly, it doesn’t grow.”

She used to do all the hiring. Now, she she doesn’t because she’s hired someone who is more capable at hiring than she is.

It’s about humility and leadership, according to Nina Vaca who, in a mere 15 years, took her company, Pinnacle, which supplies contingent IT labor to Fortune 500 companies, from nothing to more than $200 million a year: humility to know that you don’t know everything and leadership to build a team that does know what it needs to know.

“Some [business owners] spend so much time working on their weaknesses and trying to be everything but the problem is that company will only grow to the limits of the talents of that individual,” Vaca says. “You want it to grow to the talents of entire team. It takes a group to move an organization forward. Once owners understand that, they are well on their way to success.”

Building that team is job one for the entrepreneur who shifts, as she did, from a lifestyle business owner to an empire builder. “True leaders understand they don’t have all the answer and they surround themselves with the right talent,” Vaca says.

Delegating gives you more time to do what you do best, says Lisa Firestone, founder and president of Managed Care Advisors. “It took awhile to build trust,” she says, “but once you do, it is so empowering! We started to grow when I could focus on what I do best and not on daily minutiae.”

The key, she said, is making sure you’ve hired well. To do that, you have to recognize that this is the person you will be handing off to, whether it’s hiring employees, unearthing new financing options, or opening up new markets. These aren’t just employees; these are the people who will bring your dreams to fruition.

If you liked this article, you may also like:
Fastest Growing Companies Nurture Good Talent
Women CEOs Dish: 4 Secrets to Fast Growth
The Misperception That Holds Women Back