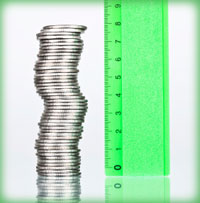 But nonprofits are just beginning to learn how to grow, and their partners – funders – are changing the rules.

Innovation funding is available throughout the government, not just from the Social Innovation Fund, but from many departments:  health, education, labor. But all funding is based on evidence. If you have evidence and want to grow, your new partner may just be the government.

Of course, the key word in that statement is “evidence.” You need to show that what you do is working well, is making a difference, and that you can make more of a difference if you grow.

Assessing capacity has changed (for the better, I think). Instead of talking to the executive director, funders need know what the front-line staff thinks. Measure who is being served, how many complete the program, and if you are reaching your target group.

Of course, the evidence-based paradigm isn’t about talk; it’s about measuring, comparing, adjusting, and measuring again.

As I’ve said before at this conference,  I agree with the concept but have to ask: Are the funders other than the speakers at the conference willing to pay for all this measuring, comparing and adjusting?