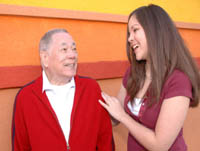 Do You Have To Move Mountains or Is Kicking a Pebble Out of the Road Enough?back
By Geri Stengelon Dec 16, 2009 - 5:24am

Definitions of Phrases Making a Difference – One in a Series

Sometimes we set standards that are so high, they discourage action. Do you have to make a life-changing difference in the community to be credited with having made a social change or is it enough that you don’t add to the burdens of the community?

The definition of social change on Wikipedia is daunting, including such phrases as “change in large numbers” and “change in the social order.”

Wow! That leaves out a lot of ventures that fit my definition of social change. I think social change has a broader definition, one that includes local and incremental changes.

Little Things Mean a Lot
In my neighborhood, members of two block associations got together to form a non profit, dedicated to the well-being of the elderly in their neighborhood. They’ve set up social events, from writing groups to holiday parties, as well as a database of people willing to help out with errands, chores or trips to the doctor.

Have they changed the world? Well, that depends on how you define “world.” They’ve certainly changed the lives of the elderly people who now feel safer because they know their neighbors are willing to help them out.

That comes within my definition of social change.

Raising Awareness
In 2008, the workers at Republic Windows and Doors peacefully sat-in at their factory when fired without severance or back pay. In the end, they got their pay and the factory was re-opened under a new owner.

Their action directly benefited only them but inspired union organizers and advocates for workers rights around the nation, and because of the attention the sit-in brought, the CEO was eventually arrested.

Shifting the Paradigm
Social change can be global, such as UNIFEM’s program of educating village leaders about the harm caused by female genital mutilation; when the leaders to buy into ending the practice, the practice is ended.

Now that’s social change by any definition! And it fits the Wikipedia definition.

There’s a Whole Lot of Changing Goin’ on
The Social Change Website links to 980 agencies that fit its definition of social change. They range from Habitat for Humanity, which provides housing, to the Innocence Project, which provides legal services. Many of the organizations are advocacy groups rather than service providers. Do they fit the definition of social change?

What is your definition of social change? How big does it have to be? Who’s made a change that you admire?

This is one in a series on definitions of phrases making a difference.
share