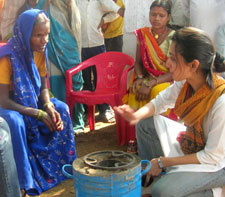 Editor’s note: To help social entrepreneurs anticipate and avoid some of the problems of starting a social-good business, Ventureneer will do a series of blogs about the progress of Greenway Grameen Infra, a very likely candidate for success. “Grameen” means “rural” or “village.” Greenway Grameen Infra is not associated with the Grameen Foundation. I’ll be checking back with them regularly to see what’s working and what’s not. Right now, it’s looking good.

Greenway Grameen Infra is building its business on co-creation. The company takes its products out of the lab into the villages of rural India where the women who will buy and use them help with the design.

In the case of Greenway’s current product — an energy-efficient, low-pollution stove — this means everything from determining flame size to the location of handles. It also means finding out that, even for greater fuel efficiency, users will not chop or break fuel into smaller pieces.

“Normally, the people who design these things haven’t lived in villages and don’t understand the mindset,” says Neha Juneja, an award-winning industrial engineer and one of the founders of Greenway Grameen.

Get out of the lab
Greenway Grameen Infra is, essentially, two social entrepreneurs with a lot of awards under their belts, a staff of three, and the goal of creating sustainable infrastructure in rural India. They funded their start-up by doing consulting work, then pooling their intellectual and financial resources.

“We learned from our first failed product,” says Juneja. “We designed it in the lab and then took it to the field and it didn’t work.”

It worked in the technical sense but generated no interest among the intended consumers.

That was a roofing project. For the stove, Greenway Grameen Infra took a different tack. In the lab, the team of engineers, a social scientist, and a climate specialist developed the standards they wanted the stove to meet: energy efficient, low emissions, affordable cost.

Then they took the prototype to the field. “If you give people a design problem that pertains to their lives, they come up with very good solutions. We learn about the product. When we commercialize it, we are very sure it will be adopted,” Juneja says.

The social good of the product is clear: The fires and stoves on which food is cooked in village homes produce a lot of smoke and require a lot of fuel. The result, as noted on the Greenway Grameen Infra’s Facebook page, is hundreds of thousands of deaths due to indoor air pollution as well as wasted hours collecting fuel.

The Greenway Grameen Infra stove is fueled by firewood or by dried animal dung, whichever is most easily obtained. The stove has better combustion, reduces indoor pollution, and requires 65% less fuel than traditional stoves thus reducing the time to collect fuel (or the money to buy it) as well as indoor pollution.

Understand the consumer
Now that the time has come to distribute the stoves, those trips throughout the villages of India are again paying off. “We have very good consumer insight,” Juneja says.

That insight guides marketing. When the first stoves reached the villages in June 2011, some customers didn’t have the $24 in hand; they said they’d come back. But often they didn’t return.

But Juneja and her colleagues had been in the villages. They remembered that when the team took pictures of people working on the stove, the villagers had been excited. They wanted copies of the photos. Now the resolution to “come back tomorrow” is bolstered by the promise of a free photo of their whole family with the stove, printed then and there.

Marketing requires different strategies for each category as well as different timing.

Market the product, not the mission
Greenway Grameen Infra does not manufacture the products it designs. Nor will it ever do so, Juneja says. The five entrepreneurs behind Greenway Grameen want to design and market products, two processes they consider linked. The products the company has on the market and wants to develop are design challenges, not technology challenges, Juneja says.

And now the stove is a marketing challenge. High-polluting stoves are a problem that is unrecognized by those who deal with it everyday. Smoky stoves and gathering fuel are just the way life is. Hence, free photos are better motivation than a smoke-free home.

The design research in the villages has built brand recognition, which will help sales. The first 1,000 stoves off the assembly line went to those who helped design them. In three and a half weeks, 4,000 stoves have been sold at $24 each. Those 1,000 co-creators apparently talked to their friends.

Distributors buy the stoves for less than $24, then mark them up to make a profit. By law, the price is marked on the product so distributors cannot mark up it exorbitantly. The mark-up isn’t high but distributors can make a good income if the volume is high. The goal is to sell 50,000 units by March 2012.

However, in order to make the stove available to a larger and poorer segment of the market, Greenway Grameen may be forced to advocate for lower taxes on its socially beneficial product. The $24 price is not cheap for the poorest Indian villagers. The price would be more than 25% cheaper if the government were persuaded to reduce the $6.50 tax on the item.

“Pricing, even a $1 here and there, is a big thing in the markets we are talking about,” Juneja says.

Use your assets
“Our biggest strength is our knowledge of the consumer that we have built up,” Juneja says. That knowledge will guide the development of their next product, she says. The product will use the heat from cooking to generate electricity.

Their design process will be the same: Visit areas where the product is likely to work; listen; re-design; listen some more.

How do you find out what customers want? How much impact do customer suggestions have on the design of your product or service?