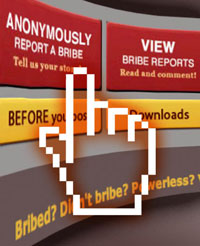 Yet another way to use social media to hold government accountable! No, not by crowdsourcing rallies and protests. A new website in India allows – encourages – people to report every time they pay a bribe; are asked for a bribe and don’t pay; or run into an honest government official.

The site, I Paid A Bribe “uncovers the market price of corruption,” according to its masthead. That’s an interesting concept right there: How much does corruption cost? The hope of the site is to “tackle corruption by harnessing the collective energy of citizens” Reports will be used as evidence in lobbying for better procedures and tighter law enforcement.

In just over eight months, the site has documented more than $8 msn.com. The article notes that more than 9,000 messages have been posted and the site has gotten more than 426,000 hits from viewers.

In 8 months, more than 9,000 messages reporting malfeasance among government officials.

Surprisingly, neither the posts nor the comments on the posts are vitriolic. Just the facts of the matter and no names of officials.

It’s not just in India that citizens are reporting crime and watching out for each other. Several apps and Facebook pages help citizens report crimes – some with maps and videos – in an attempt to blow the whistle on government corruption or inaction. Or make college students aware of dangerous areas on campus.

The world as one big Neighborhood Watch group, as it were. It’s not exactly Big Brother watching you. More like siblings watching out for you.

Will it work? Too soon to tell. But police departments in many cities already rely on crime maps to adjust patrols. Surely more information can only help.

Do some of these efforts violate privacy? You betcha! But have you noticed all the people taking pictures as you walk down the street or eat in the restaurant or ride the train? Do you know where they’re posting those pictures or what the caption will say? No, you don’t. Privacy in public spaces is an oxymoron; it is also no longer possible.

How do you feel about citizen action to report crimes? Would you report a crime if you could do it anonymously? If you had to give your name?