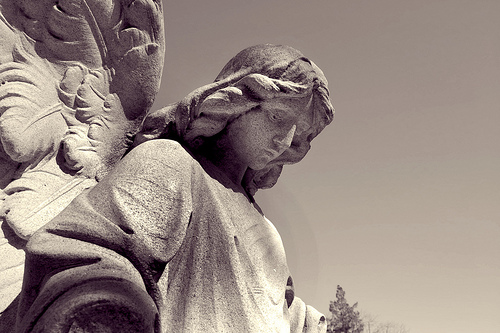 People who provide money and expertise to help small businesses become huge businesses are called angels. Some fly solo, others in a group. The benefit of a group of angels is sharing insights and expertise of other members when evaluating potential investments and, by so doing, increase the return on your investment. The whole is, after all, greater than the sum of its parts in brainstorming as well as metaphysics. It’s called synergy.

Why focus on women-led companies? Because that’s where the profit is.

Venture-backed companies that include more women on their executive management teams are more likely to succeed than companies with men-only executive suites, according to Women at the Wheel: Do Female Executives Drive Start-up Success, research conducted by Dow Jones. The report finds that companies with a greater percentage of women on the management team have a greater chance of success. Success is defined as going public, operating profitably, or being sold for more money than they’ve raised.

It makes no sense that only 12% of angels funded women entrepreneurs in 2011.

Women face bias in the tech industry, said Cameron Lester, a general partner at Azure Capital Partners, because investors “tend to go with what they know.” That phrase, “what they know,” really means that investors only want to invest in the stereotypical entrepreneur who is a young, male, geeky grad from Stanford who has served time at a hot company, such as Google or Facebook. So says Deborah Gage of The Wall Street Journal. Seems like a prejudice whose time has gone.

“Entrepreneurship is a deeply male place. Men and women exist in separate business networks and we look at this as an opportunity to build trusted business networks between men and women so it results not only in venture investment, but all subsequent business relationships that lead to big success,” says Astia CEO Sharon Vosmek in an interview with VentureBeat.

Astia is a 3,000-member global nonprofit organization, whose goal is full participation by women in high-growth entrepreneurship. Its network includes investors, entrepreneurs, and executives. It also has programs that encourage women’s access to capital, which ensures sustainable high-growth, and provides opportunities for women to develop their leadership skills. This latest initiative promotes angel investment in women-led ventures, another rung on the ladder to multi-million dollar revenues.

While the angel part of Astia Angel is new, the nonprofit isn’t. Astia has been training women-led, high-growth companies and connecting them with opportunities for 14 years. About half of their members are men as are half their angels so it is already building diverse network.

It’s not just money that Astia Angel can provide, but access to the expertise of the community, according to Amy Gips Founding Managing Partner, Astia Angel. “We really want to help entrepreneurs succeed.”

Meetings of Astia Angels are similar to those of other angel networks: Several vetted entrepreneurs do a brief presentation; questions and answers, and discussion follow, then networking. The networking — the favorite part of the meeting — gives entrepreneurs and investors a chance to get to know each other and build a more personal relationship which takes time, according to Gips.

Likely candidates for funding are found by word-of-mouth from women who have gone through the Astia training program or are referred by someone from its community members. If you’re not connected in some way to Astia, don’t despair; you can apply directly. Expect a rigorous vetting process while they get to know you.

Astia Angel’s goal is to provide on average $200,000 to $250,000 per deal. Individual angels in the network decide whether they want to participate in a deal and how much money they want to invest. Those who decide to invest form teams to conduct due diligence on the company that includes reaching out to members in Astia’s community who have the right expertise to advise on the deal.

An additional benefit of Astia is that it can help syndicate a much larger round of financing through connections to other angel groups and venture capital companies that invest in early-stage companies.

Ladies, get ready to soar. Your flight has arrived.

What’s your next move?