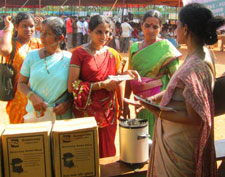 A Social Enterprise Learns, Grows From Its Mistakesback
By Geri Stengelon Jan 12, 2012 - 5:20am

Editor’s note: To help social entrepreneurs anticipate and avoid some of the problems of starting a social-good business, Ventureneer is doing a series of blogs about the progress of Greenway Grameen Infra, a social enterprise in India.

When last I wrote about Greenway Grameen Infra, its non-polluting stove, fuel efficient stove for rural homes in India was just on the market and hopes were high that 50,000 units would be sold by March 2012.

It isn’t going to happen, says Neha Juneja, an award-winning industrial engineer and one of the founders of Greenway Grameen. After an initial burst of enthusiasm that resulted in 4,000 units sold, sales dropped off. In the four months since last we talked, Neha and her partners have had a steep learning curve, about marketing, distribution, credit, and angels.

Lesson: Don’t be afraid to ask.
In a bit of a funk at their slow sales, the partners went to a conference, were inspired by a speaker, and asked him for help. And help he did. He became their mentor and their investor. “His advice on our distribution system was more valuable than money,” Neha says. (Their angel prefers to remain anonymous.)

Lesson: You need more than a great product to succeed.
Many of their potential retailers didn’t have money to buy the stoves from Greenway Grameen, which is not able tot extend credit to them. As their mentor pointed out, their marketing plan wasn’t practical or scalable. A middleman/distributor was needed who could extend credit to retailers who would then repay as stoves were sold.

The credit-extending distributors are people who are already in business, know the district and the target market, and can choose credit-worthy retailers as well as the right marketing message at the season of the year.

Greenway Grameen trains both the distributors and retailers, and is the ultimate go-to for customer service questions.

The upside of the new system: It’s scalable. The downside: The price of the stove had to increase, from $24 to $26, a significant amount of money in rural India.

Lesson: Marketing techniques matter.
While Neha and her partners learned a lot from potential customers while designing their product, they didn’t learn how to market it.

In India, products are labeled with a Maximum Retail Price to prevent overcharging. But there’s another price, not talked about but very important: the Maximum Operating Price, which is a lower price the retailer is willing to accept. It exists to give customers the satisfaction of driving a good bargain, Neha says. Their stove now has an MOP so customers can feel good about their purchase.

Another change in technique: Instead of calling people together to demonstrate the stove and, hopefully, generate sales, the company sets up stalls in local markets. People stop by and “opt in” to listen. The number of people who see the stove is smaller but they are more likely buyers.

And women are best at selling to other women. Many of the retailers are women who invite others into their homes to see the stove and answer questions. These are the women who didn’t have money to buy an inventory of stoves from Greenway Grameen but can now get an inventory on credit from the middleman.

Lesson: Direction is more important than speed.
Taking the time to establish a solid, scalable marketing plan is more important than meeting an artificial sales goal. Now Greenway Grameen will expand to new markets when it has gotten a firm footing in existing markets. No, 50,000 units will not have been sold by March but an infrastructure of distributors will be in place and a model for continued growth refined.

Lesson: Listen to negative feedback.
Their angel had a lot to say that wasn’t pleasant to hear but listening has given the company a workable marketing plan. The change in plan and price will potentially mean a positive impact on the lives of more people and more, although more slowly attained profit.

“Acknowledge what you don’t know,” Neha advises. “Be willing to change. Appreciate negative feedback; you’ll waste too much time otherwise.”

Neha is boundlessly optimistic. She’s learned so much! And seems to have enjoyed every minute of it. Greenway Grameen is already using its new knowledge in the design of its second product: an addition to the stove that will generate electricity from wasted radiant heat.

If you like this article, you may also like:
Be a Winner: Learn from Mistakes — Yours and Those of Others
Bottom Billion Is Major Market for Entrepreneurs Who Get It
Changing Investment Strategy Can Solve Problems, Generate Income