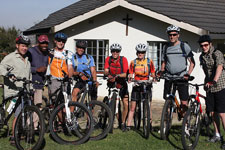 Donors are different these days. I’m talking about the individual donor, not foundations. And I’m particularly talking about the donors you hit up for more than $10 per month. How do you inspire donations in the $10,000 range?

While much attention is given to the nature of Millennials and their propensity to be more socially conscious, nonprofits need to take a second look at the older generations, the Baby Boomers and GenXers.

They’ve got disposable income and they are not like their parents were in retirement. They want adventure, involvement in something larger than themselves, and are willing to put sweat and money into causes.

Take those who signed up for a grueling 4-day mountain bike ride across the mountains in Swaziland. They each raised about $10,000 for Young Heroes, an organization that supports families caring for AIDS orphans. And these donors paid the cost of their airfare to Swaziland as well.

Those not up for the bike ride raised sizable donations as well and built playgrounds, digging holes in hard soil and mountainous terrain. Now why would anyone pay that much for such a torturous adventure?

Jeff Yoder, 56, summed it up best. He was looking for more significance in his life, something beyond making money. The trip was a life-changing experience:

I used to think “I want someday to be a philanthropist.” Now I say, “I can be a junior philanthropist now.” I’m 56. If I am going to do things in life, the time is now. Do I wait until I’m 75 to do good things? … I want to live now, make a contribution now .. The reason I am working is because I want to be able to be adventurous and generous. I can’t do that if I don’t have resources. I am working to generate resources.

He’ll be on the ride next year, he said. In the meantime, he has become an avid mountain biker and an engaged donor to other causes that provide help to Africa. His son Jacob, 17, made the trek and raised money as well. “He got to be in the company of other adults who are up to something, doing interesting things, who are interesting people,” Yoder said of his son. “It sparked something in him.”

How do you reach the Jeff Yoders of the world? How do you inspire a significant donation and a commitment to philanthropy, however “junior,” from entrepreneurs and leaders of mid-sized businesses? Those I spoke to about the Swazi Challenge cited a number of reasons for participating. They:

So what should a nonprofit do? Well, I’d quote Jeff Yoder for starters; that’s a powerful statement. Beyond that, here’s some tips learned from the Young Heroes donors:

How do you inspire major donors? What tips can you add to this list?