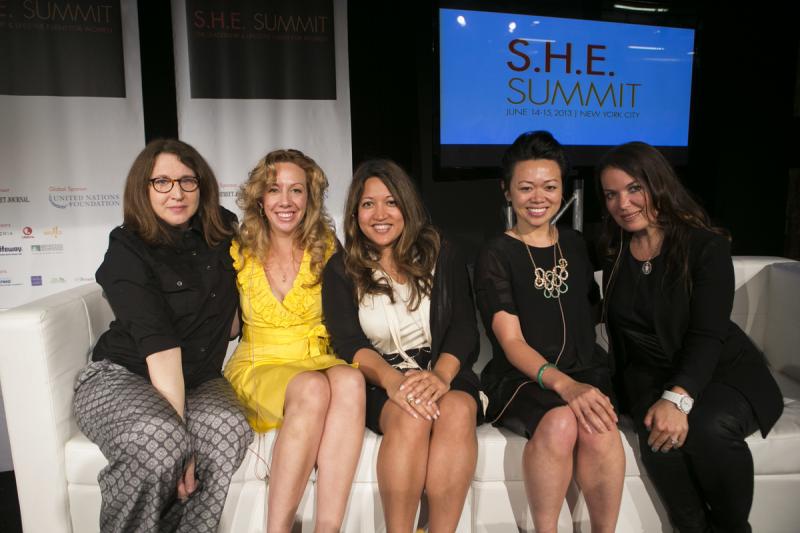 After 9 years of co-running a successful company, Shecky’s, known for its Girls Night Out events that combine cocktails, shopping and networking. Claudia Chan wanted more purpose in her life.

Open yourself up to opportunity

You can’t know where opportunity lies, if you’re not aware of what’s going on in the world. Chan became a sponge, soaking up marketplace trends until she fixated on one: women’s advancement had stagnated. Whether it is the percentage of women leading Fortune 1,000 companies, serving on their corporate boards, holding political office or raising money to scale their businesses, the numbers had stalled.

“You can’t be what you can’t see,” Chan quoted Marie Wilson, an advocate of women’s issues, and founder and President of The White House Project. It’s not that women don’t have potential, but as Chan added to the quote, “you cannot become what you do not believe.” Women need to be exposed to more female role models. Seeing women like themselves who have succeeded, makes the possibility real. It’s inspiring and shows a path to follow.

Know what you’re good at

How could Chan inspire and encourage women to break barriers? By starting a more purposeful women’s media company that could provide ambitious women with honest advice and stories of today’s leading female role models that they normally would not have access to. And by convening these women at live events, she could help them build the networks they need to achieve their goals.

While women build deep relationships with each other, to unlock our potential we need to open more doors for each other just as men do. From her past experience, Chan knows how to throw events that foster bonding. She had done this for nearly a decade with Shecky’s. Now she had a bigger purpose.

Her company S.H.E. Global Media Inc.  has launched two media brands since it’s March 2012 inception. ClaudiaChan.com, a website that shares hundreds of exclusive interviews with inspirational women from Somaly Mam to Christy Turlington Burns, and S.H.E. Summit — an annual June women’s week of events that brings the content to life. The brands are designed to inspire women to dream big and do big with passion and purpose

Chan evaluated the marketplace and found there was no direct competition. There were some high-end conferences, but no publication or conference connecting today’s women leaders with the masses. Since women approach their lives holistically, not separating personal from business, Chan’s content also combines leadership with lifestyle.

Chan chose not to raise money, she funded the company herself. She bootstrapped everything, including marketing the event. She was creative in promoting her events, partnering with other brands that aimed to inspire women, from women’s organization 85 Broads to fitness chain Physique 57 to fashion brandBCBGMAXAZRIA among others. The tactic worked. Only in its second year, the S.H.E. Summit Week attracted thousands of women to its 100+ events in across the U.S. and globally.

Chan doesn’t run her company in a traditional way. She finds people that get her mission, believe in the dream, and have chemistry with her. She will customize a job to the skill set and interests of the person she hires so they flourish. One of the advantages women have in business is that they nurture their teams.

What’s to come? “The S.H.E. Summit in June 2014 will be bigger, better and have more of a global reach,” said Chan. She’s aiming to be a cross between SXSW and TED but focused on women.